Samsung GT-I9060 Touchscreen Problem Solution Ways Repair Jumper
If ever trying to fix Samsung Galaxy Grand Neo GT-I9060 touch screen failure issues and you’ll do replacing the touch plate module, trying to calibrate the touch screen setting but unresponsive and restoring, upgrading and flashing the device firmware but nothing happens, the problem still exist and the touch screen left unresponsive.
This sometimes happens if the device suffered due to a wet damaged, heavily dropped and any related damaged accidentally done by the user. In this case only a hardware repair may only help solved the problem.
This solution below show the Samsung Galaxy Grand Neo I9060 PCB board components that holds and control the touch screen panel to work. 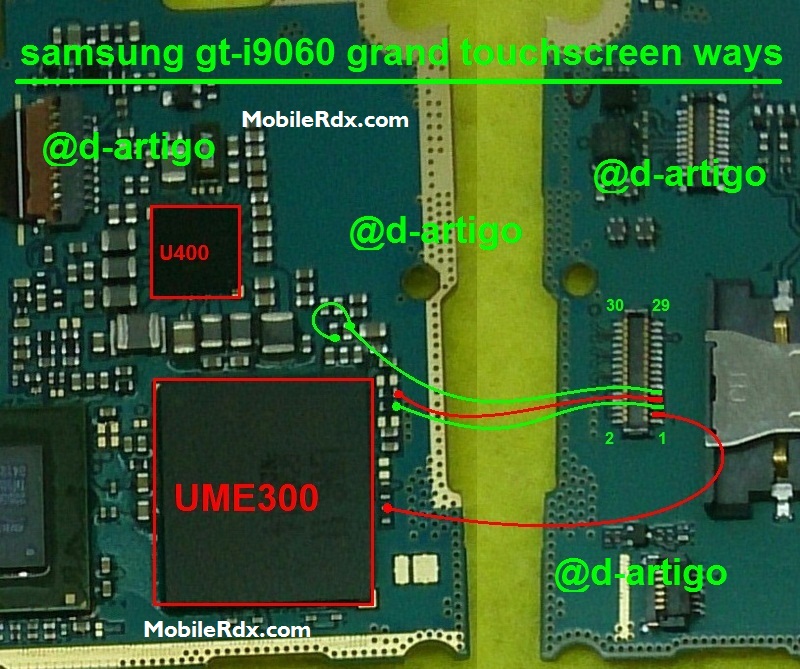 d-artigo
Samsung GT-I9060 Touch Screen Jumper Solution Ways
The solution above showed a Touch Accelerometer chip that used to sense orientation, detect direction in multi-access direction of the Touch Plate module. If the chip is damaged the touch screen will not work and remains unresponsive. This chip needs a DC supply voltage of 2.78 volts in this designed on Samsung Galaxy Grand Neo GT-I9060 and also. The 2.78 Dc volts is also feeds and supply the touch plate module.
You may check this supply voltage first before trying to rework, re-ball or replacing the touch accelerometer chip.