Repair Huawei Ascend G730 Touch Screen Problem If ever trying to fix Huawei G730  touch screen failure issues and you’ll do replacing the touch plate module, trying to calibrate the touch screen setting but unresponsive and restoring, upgrading and flashing the device firmware but nothing happens, the problem still exist and the touch screen left unresponsive.
This sometimes happens if the device suffered due to a wet damaged, heavily dropped and any related damaged accidentally done by the user. In this case, only a hardware repair may only help solved the problem.
This solution below show the Huawei G730 PCB board components that hold and control the touch screen panel to work. 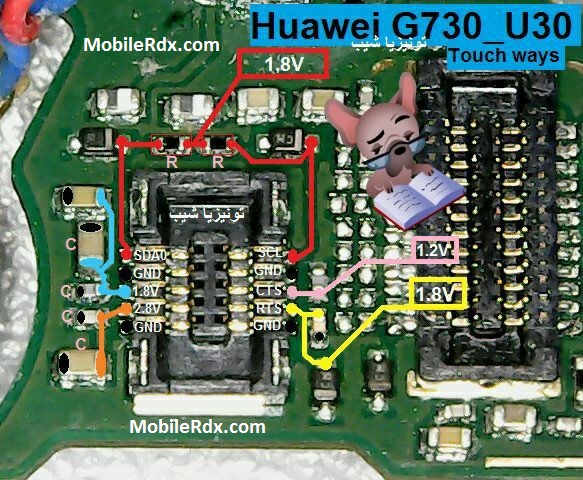 If Huawei Ascend G730 is not getting power ON, Replace the battery and try to power it ON. Plug-in charging pin into the jack and try to make it charge. Check battery terminal’s +v and -V points with electronics meter.

Solution:
Disassemble the phone Huawei Ascend G730 and check battery connectors if these are lost or not fix. Then check the whole motherboard for water and rust damages, Carbon or broken parts.

If find some rust or carbon make it clean with electronics cleaner and apply hot air with a heat gun to make it dry.

Find out these parts that are identified in above diagram and make a check for volts. If find some broken parts or tracks are missing then apply jumpers as given in above diagrams.