Reasons of Problems
Touch screen has encountered any kind of water damage or moisture.
Phone’s touch screen is damaged due to any physical collision.
Touch Screen IC might be faulty.
Loose connection of Samsung Galaxy S4 I9505 touch screen connector with board.
Screen might be broken which also affected touch screen.
Dry soldering of touch screen on-board connector.
Connector strip might be damaged.
Hadware Solution: 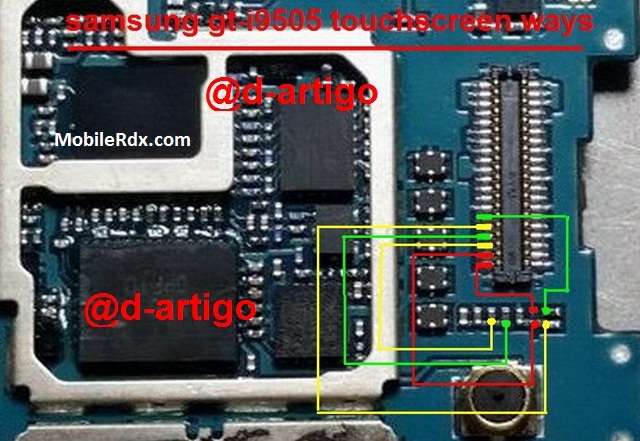 The very first thing that you need to do is to unplug, clean and reconnect touch screen connector strip and check, in most cases this has found to be a good and effective solution of this problem.
If the above step fails then look for any traces of water damage on your Samsung Galaxy S4 GT-I9505 motherboard. In case you find that then properly clean the entire board and also use a heat gun for a few seconds so that there are no traces of water left behind. This is also a one effective solution for that and any phone that has touch screen problem due to water or moisture is able to overcome this type of problem.
Now check whether touch screen connector Track Line is loose when connected with on-board connector or not, in case it is then all you have to do is to replace display screen and check.