Nokia 2 TA-1029 ISP pinout will help you to repair the set dead boot fault, EMMC Programming, Flashing, Remove FRP, and Pattern. You can easily get the ISP Pinout connection of the Nokia 2 by following the full guide below along with images. By using the ISP Pinout, you can easily bypass FRP lock or reset user data on your device via UFi Box. Check out the guide below.

The Nokia 2 TA-1029 can be used to overcome some software problems on Nokia 2 TA-1029 phone, to direct it you can use a flasher box that has direct isp feature support and usually thae flasher box can also be used for repairing emmc like Easy Jtag, Ufi, etc.

Remove Pattern Lock, Screen Lock, Finger Lock in Nokia 2 TA-1029 with UFI Box you can easily solve with this method if you are fresher technician or experienced technician in android software related if the error occurs of USB not recognized then your USB is not working.if a battery is not charged, your USB socket will not properly work and you will fail in this method. if any issues please write your questions in the comment box I will try my best to help you.

Nokia 2 smartphone was launched in October 2017. The phone comes with a 5.00-inch touchscreen display with a resolution of 720×1280 pixels. Nokia 2 is powered by a 1.3GHz quad-core Qualcomm Snapdragon 212 processor. It comes with 2GB of RAM. The Nokia 2 runs Android 7.1.1 and is powered by a 4100mAh non-removable battery.

What is ISP Or eMMC Pinout?

ISP orIn-system programming also known as in-circuit serial programming for hardware that has a cross-reference of pins or contacts. By shorting the pins together, you can power or signal the logic board (motherboard) of an electronic device such as a mobile. The eMMC solution consists of at least three components – the MMC (multimedia card) interface, the flash memory, and the flash memory controller – and is offered in an industry-standard BGA package. 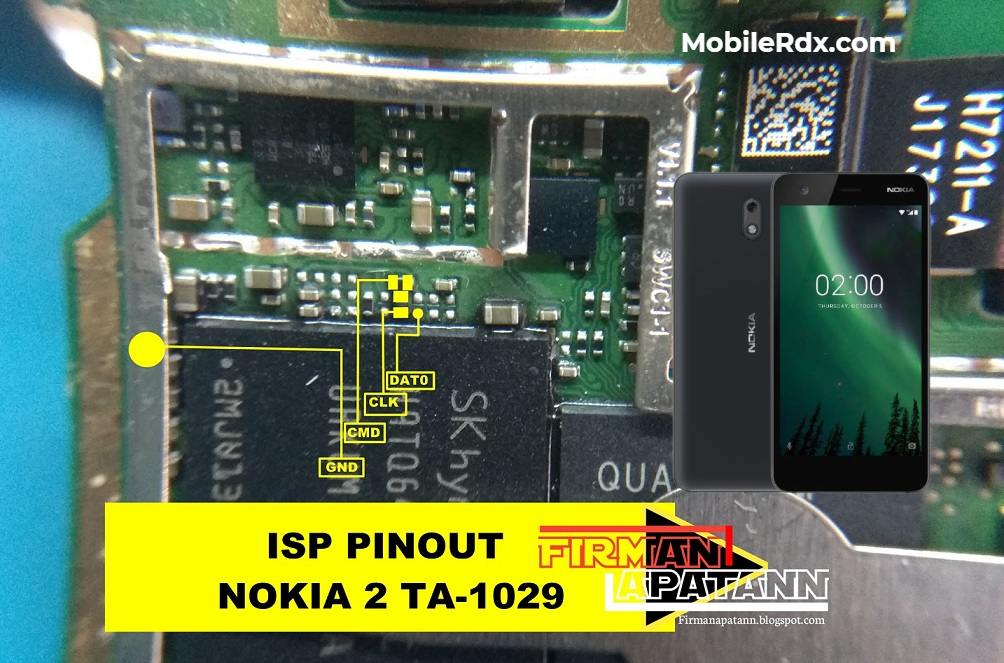