By Mobile Rdx Last updated Oct 17, 2014
0
Share FacebookTwitterPinterestEmailWhatsApp
Samsung E2652w ​​Mic Ways Solution – On this occasion we will try to discuss the issues at Samsung GT-E2652w ​​mic, mic damage typically occurs frequently because the mic itself is damaged. Damage mic on Samsung E2652 ​​is usually caused because the mic hole closed, or simply because the mic itself is damaged. Here are the simple steps to overcome untum mic repair.
The first step try to check the mic hole on the mobile phone, the mic hole closed may result in imperfect sound captured by the microphone, so what’s wrong first checking the mic hole. If it is ascertained mic hole is not a problem, try the next step.
The second step of course you can try replacing the mic, mic damage on Samsung E2652 often because of the mic that is damaged and must be replaced, if after replacing the mic does not solve the problem, you can try the next step.
The third step checks one by one mic lines as shown below, if there is a break point try to do a careful jumper.
Hardware Solution 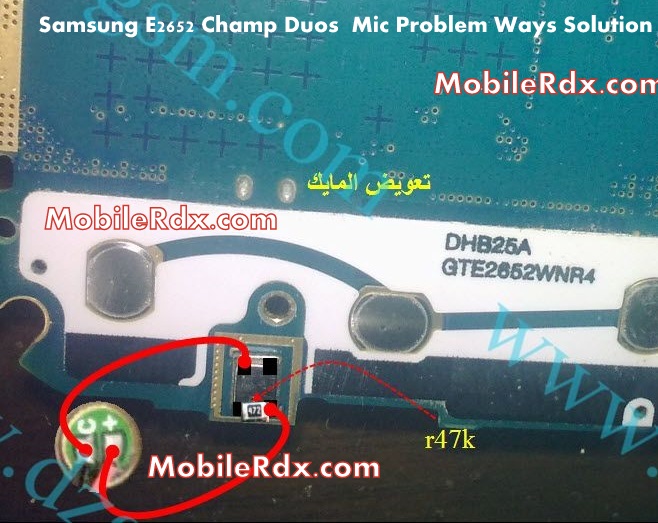 If you have further Questions please leave a comment.
Note: Please note that even though every solution posted on our website is tested by one or more members of our team before posting, but still we do not take any responsibility for any damage it may cause to your cell phones. Use these repairing solutions at your own risk. Thank You.
Samsung GT-E2652w Mic Jumper Solution, Mic Ways, Mic Modification Ways, Microphone Solution, Repair Mic Problem.
Samsung E2652 Mic Not Working Problem Solution, Samsung E2652 Mic Solution Ways.
Read More:-  Samsung I8262 Mic Ways Problem Tested Jumper Solution
Mic JumperMic Not WorkingMic SolutionMic WaysMicrophone Solution

How Can One Surely End Up Making a Productive Revenue From…